In his column on education for the NY Times in last Sundays edition, Stanley Fish, noted academic and author, reviews a new book, The Last Professors: The Corporate University and the Fate of the Humanities, by Frank Donoghue, in which the author argues that higher education is not the same as it used to be and never will be again. It is no news that that liberal arts education in general and the humanities in particular face a crisis; many lament the trend towards what amounts to pre-professional training and away from a focus on turning out well-rounded students with a broad understanding of their cultural heritage, let alone the ability to think critically and write a coherent sentence. As Fish pioints out, in all but a few private wealthy universities, "healthy humanities departments populated by tenure-track professors who discuss books with adoring students in a cloistered setting – have largely vanished." We can round up the usual suspects for this development, from the focus on delivery of learning through the cheapest and most convenient method possible (and hence most profitable for the institutions); to the preponderance of what Fish calls "itinerant teachers," those hard-working and low-paid adjuncts who make up an increasing percentage - up to 65% - of the teaching staff at colleges and universities; to a general devaluing of the idea that higher education should expand students' minds. Rather, universities and colleges have embraced a business model that sees only one imperative for higher education: to deliver the information and skills necessary to gain employment, and if that can be accomplished with a disc, Internet hook-up, and a computer screen, so much the better. So much for learning for learning's sake, a value that goes back all the way to Aristotle. Fish's article can be accessed here: http://fish.blogs.nytimes.com/2009/01/18/the-last-professor/?emc=eta1

I couldn't help thinking about another article I had read earlier in the week about a school for girls in Afghanistan. Several students at this school have been attacked in recent weeks by men on motorcycles armed with containers of acid. Several young women have been disfigured. These men "want us to be stupid things," one young woman said. In defiance of such brutal tactics, the parents, administration, and the girls themselves have refused to bend. The school has stayed open. Contrast this with the indifference to learning in this country. School is seen as a chore, as something to be "got through." Those who do go on to post-secondary education, for the most part, value only the piece of paper at the end which will enable them, supposedly, to make more money. Knowledge, as opposed to a practical skill, is not what it's all about.

What all this bodes is what some have called the "coming dark ages." We may be on the brink of an era in which all that stands between the preservation or loss of the accumulated knowledge of millennia is a dedicated enclave of brave and enlightened intellectuals - our professors. Their adversary is twofold; both are anti-intellectual in nature. One sees education as a business with profit as the bottom line in any decision-making process. Not only are earnings the overriding consideration for the school but the only knowledge that counts for students is that which will translate into a higher salary in the job market. The other adversary, and one which is related, is the tendency towards superficiality and triviality in American society. This adversary comes not with sword and gun but with Wii and YouTube and MySpace. This enemy offers no ideology or philosphy for life other than the superficial one of "fun and games." It is a mode of being that requires no effort, no thinking and repays the time spent with simple amusements that distract and deliver momentary and paltry pleasures. This adversary is arguably the more insidious of the two; whereas the first at least advocates the training of minds for a pragmatic purpose, this one wants to eat the minds of our young. As Neil Postman put it in Amusing Ourselves to Death:

Now that Huxley's fears seem to be borne out by our social reality, my hopes are not high that the tide will turn, that educators will get the respect and esteem - and the institutional support - they deserve. The election of Barack Obama to the presidency registers one small advance, perhaps, toward redefining who our heros are along intellectual lines. But we have a long way to go before "intellectual" as a quality ceases to elicit more than a contemptuous, or at the very least, a dismissive response.
Posted by Jeanne Lombardo at 9:39 AM 4 comments:

The Condition of Children and Barbarians

The headlines over the last ten days have been dominated by news from Gaza as the Isrealis and Hamas engage in a deadly and escalating kind of reciprocal "rumble", each street gang refusing to stand down and consider the future implications of their actions beyond simply coming out on top, regardless of the number of lives sacrificed in doing so. Of course one might say that both sides are considering the future implications and that security and continued existence of their respective states warrants such action. They believe that in order to survive one must eliminate the threat once and for all. There are times in history when this has been an effective strategy for survival, when it has been necessary to destroy evil, but until the modern age, it has necessitated the complete destruction of whole cultures.

The strategy to eliminate the other is less and less effective in the modern world. It is based on a view of the past that not only tallies up the wrongs suffered at the hands of the enemy as justification for further violence but that unrealistically assumes that there is one discreet, self-contained entity that can indeed be totally eliminated. The end result of such action is usually not complete victory for one side but rather the destruction of countless lives on both sides and an uneasy "peace" waiting for the next retalitory response. In the case at hand, the Israelis and the Arabs are continuing a mode of behavior that their past experience would seem to indicate is getting them nowhere, locking them into endless war.

In an op-ed piece in todays New York Times, Roger Cohen equates such a policy as "rule of the dead," a dominion he sees as prevalent only in the Middle East today. http://www.nytimes.com/2009/01/08/opinion/08Cohen.html?th&emc=th The rule of the dead demands that one look primarily to the past, to the long line of injuries perpetrated first (if there is a first) on this side then on that, to justify the perpetuation of conflict. The dominion of the dead, of the past, precludes any peace in favor of the living. The dominion of the dead fattens itself on the blood of the living.

This is where future consciousness comes in. Future consciousness is all about learning from the past and applying what you have learned to the future and in so doing creating a better world than the past. Future consciousness prescribes creating a constructive future rather than falling into a repeat of an ineffective past mode of being. Future consciousness is being informed by the past in order to get to someplace new, in order to change, not stay stuck in destructive modes of behavior that perpetuate negative features of the past. Cohen cites the Germans and the French, the Japanese and the Chinese, as examples of peoples that found a new way to co-exist. And while it is true that the destruction of the evil that was Nazism and Japanese imperial militarism was necessary to pave the way for this new pattern of behavior, can we not hope that reasonable people on both sides of this conflict can learn not only from their own past experience but from world history as a whole.
Posted by Jeanne Lombardo at 11:12 AM 3 comments:

Just Say No to Thinking 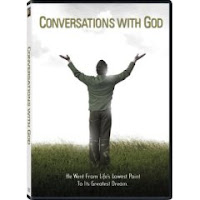 Well, it's the new year and an email that appeared in my box today alerted me to the fact that it's time to emerge from the fat and sugar-induced stupor of the holidays and regroup for the ongoing battle against the dangerous forces of narrow-mindedness, group-think, and religious dogmatism. This time it was an email diatribe and urgent warning against Neale D. Walsch's "devastating" book, Conversations With God, a book that purportedly spreads the "false doctrine of the devil" in the guise of spiritual guidance. Of special urgency to the writer of the email was the vigilance required to prevent this book and Walsch's Conversations with God for Teens from falling into the hands of schoolchildren lest "exposure to worldly mediums" corrupt them and distort the only truth acceptable, that of the Bible. Noted examples of disagreement with Biblical teaching involve God's answer, in Walsch's voice, to a girl who inquires why she is a lesbian, to which God/Walsch responds that she was born that way because of her genetics. The author also has God disavowing the idea that premarital cohabitation equates to "living in sin" and is dismissive of the idea of sin itself.

While one may debate the wisdom of Walsch's responses in this book, and certainly one should not accept his word at face value any more than any other writer's in the market-place of ideas, the issues he discusses are serious ones with which people grapple in a globalizing world that more and more presents us with confusing and difficult choices. To offer only adherence to an inherited and strict code of conduct that goes against the nature of what many people actually experience, and instinctually feel is normal, is to place a psychological stranglehold on them. This is not to say that we should all dive down the hole of cultural and moral relativism, or that we should simply engage in compulsive, feel-good behaviors, but that young people should be encouraged to THINK about the moral choices they are called upon to make and explore the issues from a wide perspective. In contrast, the Walsch-bashing email circulating about is representative of the kind of rigid closed-mindedness that prescribes blind acceptance of doctrine over a rational evaluation of ideas, and which ill equips people, especially the young, from forming the capacity for critcal thinking and moral evaluation so necessary in our contemporary social environment, an environment which offers up to our young a constant diet of far more damaging, shallow, and pernicious fare than this supposedly dangerous book.

Conversations With God is a thought-provoking book and on that point alone I would recommend it. For that matter, I would recommend reading the Old and New Testaments, the Koran, and the Bhagadavita. It is only through a broad exposure to contrasting theories that one develops the capacity for critical evaluation of ideas, for being able to distinguish the garbage from the gold, to separate the bullshit from the truth. And while, as a parent, I disdain the easy availability of smut, stupidity, violence, and mind-numbing trivia over the Internet and other media, the answer is not to prohibit, since restrictions are all too easy to get around and tend to create a mystique around the thing prohibited, in turn making it more desirable. A better tack is to create in young minds an appetite for excellence, a distaste for junk, and a desire to think. Expose them to the great ideas, literature and art of our culture and other cultures. At the very least, encourage them to read. As a parent, I would be thrilled if either of the teens in this house would turn off the TV, get up from their computers, turn off their iPods or cell phones, and read books, even ones less deserving of respect than this one.
Posted by Jeanne Lombardo at 6:46 PM 1 comment: