Evolution Part II: The Wise Cyborg and Other Jolting Bisociations 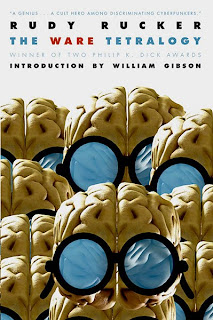 In our last blog, we were moving forward in evolutionary time circa 100,000 BC. Modern homo sapiens (that is, our direct genetic ancestors) had only recently come on the scene and these early homo sapiens were making initial contact with their northern genetic cousins, Neanderthals.

I was into describing for you the grand saga of our history laid out in Stephen Baxter’s Evolution. Since that last blog, I finished Baxter’s book, which eventually moves into the present, chronicling the downfall of modern civilization, and then sails forth into the far distant future circa 500 million AD. Ultimately the novel is tragic in scope--but of course on a big, cosmic scale. All of our intelligence, gadgetry and economic power and wealth is not sufficient to maintain itself and modern humans pass into oblivion--into the “dark backward abysm of time.”

But along the way, the story told of our lives (the life of humanity) is very moving and thought provoking. The chapter titled “Mother of Her People” recounts the life of the female human (circa 60,000 BC) who creates tattoos; witchcraft; totems and taboos; myth, animism, and superstition; grammar; and shamanism--a woman tormented by migraines, powerful visual hallucinations, and obsessed with understanding the connections between things. She is the genius who seeds modern human culture.

In later chapters, Baxter describes the lives of Cro-Magnon humans living through one of the Ice Ages in Europe; the death of the last Neanderthal (we killed him); the rise of agriculture and cities, which is accompanied by the emergence of drunkenness as a way to cope with the drudgery and monotony of settling into cities and working the fields; and the adventures of a Roman scientist (circa 400 AD) in search of dinosaur bones--he gets it; he understands the grand panorama of history--but the light is snuffed out for over a thousand years.

On the other side of the present, intelligence wanes and civilization falls; our descendants go back to the trees and their brains shrink; rats, pigs, and goats evolve into the dominant mammal life forms; one of our lines becomes domesticated by the rats; and in the far distant future, our very distant genetic children realize a symbiotic and totally dependent relationship with a new species of trees--trees that are our mothers--our wombs--who raise and feed us, who, in essence, give birth to us. Yet, as the sun is swelling and turning red and the earth is drying up and dying (circa 500 million AD), a metal sphere comes floating down out of the sky looking for the creatures who made it and sent it off into space millions and millions of years ago. Reminded me of the ending of Wells‘ The Time Machine. A consciousness expanding trip. Bleak and sad, poignant and humbling.

I also finished reading The Shallows: What the Internet is Doing to Our Brains by Nicolas Carr. It is a great book: a warning and a challenge; a historical, psychological, and biological examination of the intimate connection between humans and technology; an exploration of how technologies structure, support, facilitate, empower, and at times degrade and disrupt our capacities and psychological abilities. In it the author delves into the rise of writing and of books and how they changed our minds, our brains, the world that we live in. And more immediately, the author poses some serious questions: Are we becoming more fragmented, more flighty, more narcissistic and socially inept, more distracted and shallow because of Google, Apple, search engines, social webs and networks, cell phones, YouTube, Twitter, Facebook, etc. Carr thinks that there is a lot of evidence that we are. We are not creating technologies that serve our intelligence--we are not using our gadgets toward wise and enlightened ends. You could write a whole book on these questions, issues--which Carr has.

Carr’s book is a warning call for our future evolution, a warning about creating a future world that, though technologically more jazzed up than the present, may lead to a bunch of low grade imbeciles who can hit keys a mile a minute, find answers for the quiz in a nanosecond, and know what all their “friends” had for breakfast that morning, but can’t think or reason, and have no depth.

To this end, together with my colleague and techno-adrenaline charged friend, Ray Todd Blackwood, a CFC advisory board member, we are creating “The Wise Cyborg” educational project. We will be doing a very short presentation on the concept this Saturday afternoon at 4 pm at the TEDX event at ASU and this coming year we will be writing a paper and developing a lengthy presentation/workshop for the World Future Society conference in Vancouver in July. The idea of the “wise cyborg” first appeared in my article “Wisdom for the 21st Century” which is up on my website and is being published in the Journal of World Affairs this winter.

What is a wise cyborg? (Sounds like an oxymoron, a psychologically dissonant combination of ontological categories)

A wise cyborg is a person who utilizes mental technologies to facilitate the pursuit and exercise of wisdom.

You may ask, what is a “mental technology”? Well, we have plenty of them all around us.

A mental technology is a technology which supports and/or enhances mental/psychological functioning and activities.

And further you many ask, why should we be concerned about cyborgs? Because we are them and getting more so all the time.

A cyborg is a functional synthesis of the biological and the technological. Humans (even pre-humans) have been intimately and functionally connected with their technologies (instrumentalities) from the beginning. Human capacities and ways of life are almost always realized in the context/support of technologies. Humans are “natural born” (as Andy Clark notes) ever-evolving cyborgs. As in the past, technologies in the future will further enhance and augment human capacities.

If we are becoming more cyborg-like then we better figure out how to become wise cyborgs, rather than foolish and shallow ones.

Another book I am reading, The Nature of Technology: What It Is and How It Evolves by W. Brian Arthur, is a ponderous, often repetitive, highly abstract, and absolutely profound work. It is deep--very deep--like Aristotle. Arthur asks the fundamental questions and comes up with a whole new ontology (metaphysics) of what technology is. And he comes up with a theory of creativity and evolution, which I think is very sound and very enlightening. And we are in the middle of this genetic stew (there is a genetics to technology, according to Arthur) of assemblies, pieces and parts, apparatus, mechanisms, and families of related gadgets. Technologies evolve by combining together (out of the gene pool). Technologies “capture” phenomena of nature and, through collections of orchestrated technologies, we coordinate these phenomena to serve our goals. Though Arthur states that technologies are created to serve human purposes, it is equally true that humans end up being molded by and serving the functional ends of technologies--a reciprocity.

It hits me in reading Arthur and connecting him back to Carr, that it is critically important, that the “wise cyborg” (as part of his or her wisdom) needs to understand the affordances of evolving technologies and how to combine and create those “assemblies” that serve wisdom rather than serve the “shallows.” We need to know our tools; we need to create our tools. Or else we are going to end up like the 21st century humans in Baxter’s Evolution. Extinct. Snapshots in the family album.

Arthur Koestler in his great book The Act of Creation proposed that all human creativity involved “bisociation”--the bringing together and synthesizing of apparently disconnected and unrelated ideas or devices (but of course, a device is an idea). From the perspective of the status quo, creative combinations seem bizarre, perhaps ridiculous--but that’s exactly what makes them creative. Arthur thinks that all technological evolution and creation is combinational--nothing suddenly emerges out of nothing. (Play that phrase around in your head) Lynn Margulis, the evolutionary biologist, believes that evolution involves new symbiotic connections--“chimera”--beings composed out of diverse and seemingly incongruous genetic parts. Matt Ridley in The Rational Optimist sees cultural and economic evolution happening in a similar fashion with different cultures sharing their wares and innovation emerging through syntheses out of the smorgasbord of cultures. It is combination through bisociation.

When I submitted the paper proposal “The Wise Cyborg” to the educational journal On the Horizon, the editor suggested I read (if I hadn’t) Rudy Rucker’s The Ware Tetrology. I hadn’t read it, so I ordered it and I am now deep into it--laughing all the way. Giant computers (Big Boppers) are attempting to assimilate all little boppers and all humans into the One (the cosmic ray background radiation of the universe). They need to eat your brain to do this. One of the main characters in the novel (thus far) is Sta-Hi; he doesn’t want his brain eaten. But he does like drugs, and he does like all the techno-enhanced drugs and body enhancements/sense amplifiers the computers are creating. One could say his brain is being eaten already. One of the new drugs on the scene is “merge.” You take it with someone else--that special someone--and your bodies melt and merge together. Creates the best sex ever; techno-enhanced interpenetration--body, senses, and mind flowing together and mixing into a puddle of protoplasm and unified consciousness. Sounds bizarre, disgusting, revolting? Yes--absolutely creative. (More on this on the next blog.)